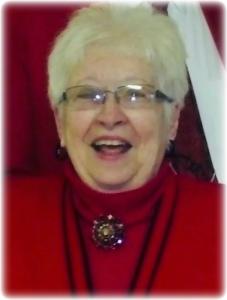 Jeanmarie Shepard, age 89, entered fully into the presence of her Lord and Savior, on Friday, August 28, 2020, at her home in Sac City, IA. She was born August 15, 1931, to the late Harry Eugene and Ida Marie Richards during the Great Depression. Harry rushed Ida to the ER where Jeanmarie was born and thankfully, by God’s grace, both Ida and Jeanmarie survived the whole ordeal. The doctor told them that the placenta “arrived” before the baby and more often than not, that situation usually meant death for both mother and child.

Jeanmarie had a love for many things throughout her life of course her love of God and family was always at the top of her list but next came her love of music. She was taking piano lessons by the age of four and absolutely admired her piano teacher, Miss Wade. By the age of five Jeanmarie was playing the piano and singing on the Radio Gospel Hour with Pastor Robert Fraser, the Blind Singing Evangelist, on a radio station in Philadelphia. She always recalled the radio announcer placing telephone books under her so she could reach the piano keys. She played the piano and organ for church at the age of thirteen. She was so blessed by God in her musical talents at the piano and organ as well as singing all throughout her life.

Jeanmarie wanted to be a nurse after she graduated and fortunately she lived close to a hospital that meant she could easily walk to work if she were to get a job there. Her parents however, suggested she look elsewhere for a job. She wrote in one of her books that she knew God had a plan for her so she wasn’t upset with how things played out. It just so happens, a member of her church would soon contact her to let her know a position was open at the hospital and encouraged her to apply for it. Jeanmarie applied and was hired as a file clerk at the very hospital she had hoped to work at. She was a fast learner and went on to run the switchboard and eventually became a medical transcriber.

An excerpt out of Jeanmarie’s book talks about how her father taught her to drive after graduating high school since it wasn’t something that was taught in school back then. Fast forward a bit…the fact that she was able/knew how to drive would come in handy, hence it being mentioned. The story goes that Jeanmarie and two of her friends hopped on a bus that would take them from Phily to Providence, RI, and from there to Chatham, MA, where they would vacation for Labor Day. They were delayed by an accident on the highway which meant they would miss the bus out of Providence that would take them to Chatham. They arrived in Providence and had no idea what they were going to do. They saw nothing around them- no restaurants, grocery stores, or places to stay. They were of course scared and decided to do all they could do- walk and pray. Turns out a man by the name of Ray Shepard, along with his best friend Kenny Starr, would come to the girls’ rescue. Ray and Kenny were both stationed at the Quonset Point Naval Base in Rhode Island and had driven to Providence that day to attend church. They were out for a drive when they noticed what looked like three girls in distress. The young ladies tried losing them by walking down one way streets after the young men had tried talking to them. After all, they had no clue who these men were. Jeanmarie writes: Finally, God brought us together so we could talk and Ray and Kenny insisted they take the young ladies to Chatham. So, since Jeanmarie knew how to drive it was decided that she would sit next to the driver so if anything funny started going on she could take the wheel while another would go for the brake and they would all make a run for it. Well, they safely made it to Chatham and the rest is ‘history’.

On March 25, 1961, Jeanmarie married the love of her life, Ray Warren Shepard, in the Arch Street Methodist Church in Philadelphia, Pennsylvania. They were married for 59 years. This union was blessed with five daughters: Ruth, twins Melody and Melinda, Julie, and Merriann. She loved being a wife, mother, grandmother and great-grandmother. She also loved being a pastor's wife to Pastor Ray, and teaching Bible and marriage classes for women.

Jeanmarie was a writer of books. Her column VIVACIOUS HOMEMAKER was read across the country as well as in several newspapers including The Sac Sun out of Sac City, IA, and The Sheldon Mail-Sun out of Sheldon, IA. Her daily email GOD’S DAILY WORD, was sent from her computer to nearly 300 readers.

Jeanmarie was preceded in death by her parents, Eugene and Ida Richards; stepmom Mary Richards; and son-in-law Chris Conderino.

In care of the family.