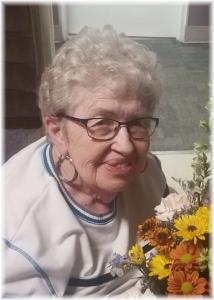 Susan was born on February 1, 1938, in Storm Lake, IA, to Russell H. and Margaret (Stark) Miller.  Growing up, Susan and her sister Joye lived on a farm near Storm Lake.  She attended elementary school for two years at Truesdale and when the school consolidated completed elementary at Albert City-Truesdale.  She graduated from Storm Lake High School in 1955.  She continued her education at Nebraska Christian College and then two years at Buena Vista College in Storm Lake earning her teaching certificate.  She was a student teacher at Sioux Rapids, IA, and continued teaching for several years.

On August 30, 1957, Susan was united in marriage to Richard Savage in Storm Lake.  They were blessed with three children:  Jeffrey, Gregory, and Melody.  She was baptized at the Church of Christ in Storm Lake where she later served as a deaconess.

Susan enjoyed teaching and being a homemaker.  Caring for her family and children’s needs, attending their activities, and providing a loving and comfortable home brought her great joy and pride.  After her children were grown and out of the home, Susan drove truck with her husband.  When they retired from trucking, Richard worked part time detailing trucks in Lake View.  Susan was happy to be home and treasured spending time with her grandchildren and great-grandchildren.

Thursday, December 26, 2019 at 10:16 AM
“Darrell and I were sad to hear of Sues passing. We had the pleasure of trucking with Dick and Sue and Greg and have many good times from those days. It was a pleasure to call her over the years and reminisce . RIP Sue, Sincerely Darrell and Donna Jones”
- Darrell and Donna Jones
Wednesday, November 20, 2019 at 9:25 AM
“Jeff and Melody, family and friends, I am very sorry for your loss! I so enjoyed Aunt Sue's company when she and your dad (Dick) came to whatever town we were living in, and how special that they took time out to visit with us, and other members of our family! I will cherish those memories. God bless you all.
Becky, Dan and Ashley Vacanti”
- Becky Vacanti
Click Here If You Would Like To Leave Your Condolences