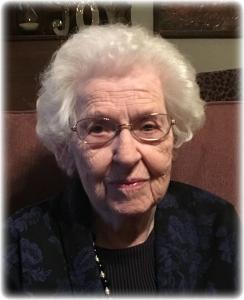 Ilene Joy (Schnell) Wedeking was born November 19, 1925, to Edward and Nellie (Schade) Schnell and grew up in rural Jackson Township, Sac County, IA.  She was baptized on November 30, 1930, and confirmed on May 14, 1939, in the Lutheran faith.  She attended Jackson #5 Country School and was a graduate of Sac City High School in 1943.  While in high school she worked at the Sac City State Bank, and continued working there until she married.

On February 6, 1949, Ilene married Donald Wedeking at St. Paul Lutheran Church, Sac City, and was a life long member there.  They were blessed with three children: Marie, Neil, and Marsha.

Ilene was a homemaker and bookkeeper for the family farm south of Nemaha.  Through the years she was involved with 4-H, Girl Scouts, and making quilts at St. Paul for Lutheran World Relief.  Ilene enjoyed attending Reading Club, LNO, Diamond Birthday Club, LWML, and Ladies Aid at church.  For many years she was the Delaware Township Clerk and was actively involved in overseeing the Nemaha Historical Society Building.

Ilene and Don enjoyed attending their children and grandchildren’s school activities and in later years, ISU football and basketball games in Ames.

Ilene passed away November 10, 2019, at Loring Hospital in Sac City.  She was preceded in death by her husband Donald in December 2011; her parents, Edward and Nellie Schnell; her sister, Juanita Schuknecht; and in-laws, Herman and Olivia Wedeking.

Saturday, November 16, 2019 at 2:15 PM
“So sorry for the loss of your mother. Please accept the sympathy and prayers of our family to your family. ”
- Georgia Vajpeyi
Click Here If You Would Like To Leave Your Condolences